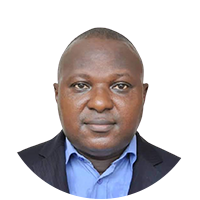 Ajibola Abayomi, a Nigerian, is a journalist, public speaker, social analyst and media personality both on radio and television.

The astute journalist had a background in both broadcast and print media and had worked with several newspaper outfits in Nigeria since 2002 where he has covered almost all known beats in journalism.

In February 2010, he became the News Editor, Saturday Independent, a position he held until 2015 and later Editor at The Society Post Magazine in 2016 and became the Managing Director/Chief Executive Officer of the TheLead Publications, the publishers of TheLead Online and TheLead Magazine in 2017.

The migration advocate founded the Journalists International Forum For Migration (JIFORM) now with over 300 journalists covering migration issues across the globe in 2018 after attending a workshop facilitated by international media trainers in Lagos Nigeria for editors.

Ajibola, member of both the Africa and World Editors Forum has so many laurels to his credit that include

In addition to his job as the CEO of TheLead publications, he is the President/ Executive Director of JIFORM, the global media body that has been organizing international summits/workshops on migration for journalists and stakeholders since 2019.